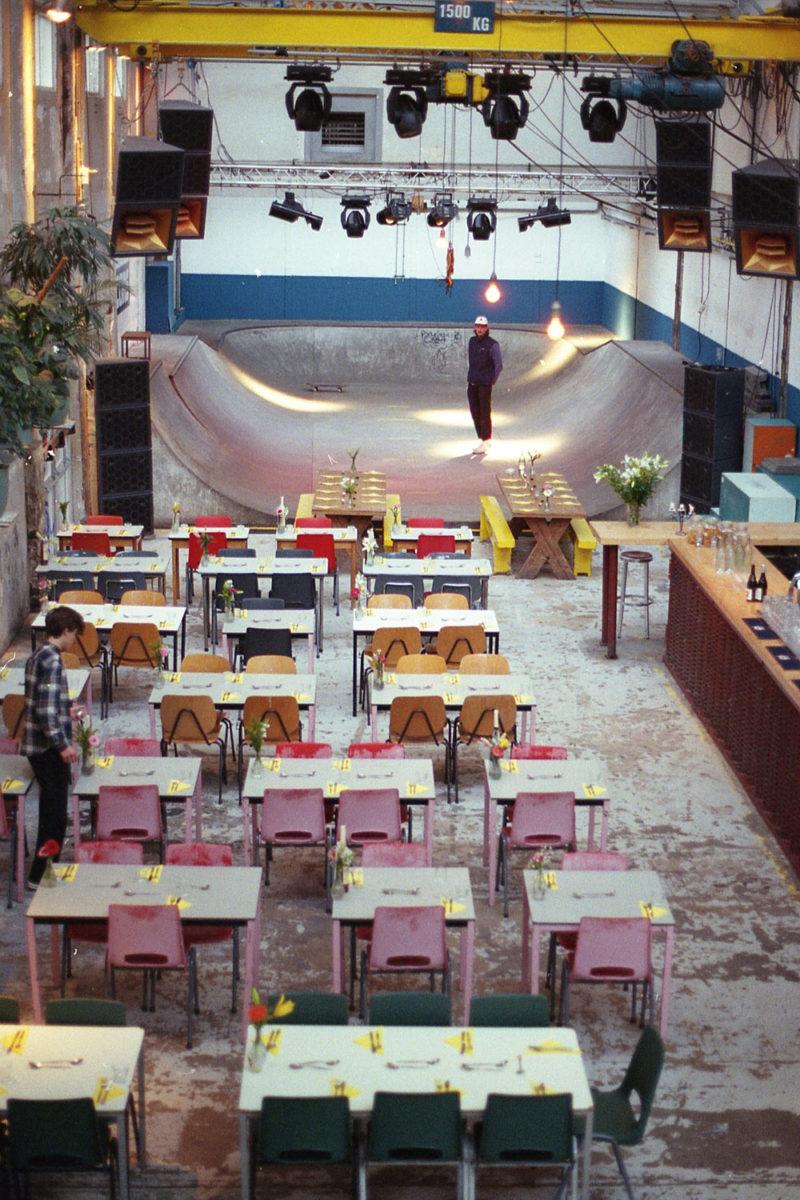 As the city of Amsterdam is getting busier and busier the city centres boundaries expand. The empty warehouses of the old industrial area Amsterdam Noord offer great opportunities for youngsters to get together, just like for Colin Vlaar. He rented a couple of these warehouses with friends and started a district of lively nightlife, cosy restaurants and his very own Skatecafé. A café where you can combine having a decent dinner, beers and a party with a skate session on the miniramp, a combination we wanted to know more about.

How and when was Skatecafe born? How did it come to be?

Skatecafe was born end 2016, before we were welding in a workplace just around the corner. We were building a little cinema at the moment, that’s where I met Jordy and Jan with who we run the café today. Before welding I was building skateparks with a couple of friends in the South of the Netherlands. Together with them we built our own mini/bowl in our café.

Would you describe yourself as business or as creative?

At the age of 19 I started my first company, that was a clothing brand. Did a lot of fun things with friends, hosted parties and printed some drawings on clothes and sold them. In one way you can call it business but it’s always a business in a creative way. I believe a lot is possible if you like to accomplish things. If you really want to create something in a professional way, there’s some business that comes along. If you arrange the business in a good way, there’s more room for creativity.

How did you get the inspiration for skatecafe? Does anything similar exist?

We always used to go surfing in Spain and France. There always where miniramps on these surfcamps. Drinking a couple beers and playing around in the mini was always fun so thought that should be possible over here as well. When I worked at Pier 15 skatepark, which we were building later, we were partying next to the skate course there and saw a bit how that worked. Skatecafe is in some way a combination of all that.

Are you creating your own paradise? You appear to be the type of guy that’s likes skateboarding, a cozy beer, some nice food and a hard party. Is skatecafe secretly your mancave?

Haha, we’ve got a workplace behind the café for welding and woodwork, here we can create almost everything ourselves. Like the football pitch in the back. Everything in the café we built our self. So in that way we can create a lot of things we like. If we weren’t able to build we would never have managed to create the café. Having all this around and all the nice people we run the place with makes it very special to me.

What kind of people usually come to skatecafe? Are most of them skaters? How does having a skateramp combine with parties and dinner?

We wanted to create a place for everyone, we never focus on a particular group and don’t have any kind of door policy. When we started the cafe, the only people who knew of it’s existence were our friends, so back then it were mainly them who visited us. As we grew many more people got to know of it and many more people came to skate, eat drink and dance over here. At the beginning of the day we do skate lessons for kids, then from 16.00 the ramp is free to skate for everyone free of charge. It makes a bit of noise during dinner but it’s fun to watch while eating. Most of the people enjoy it a lot! We still think it’s a really nice combination, a place where you can have dinner and skate inside. There aren’t many places where you can have a good session, nice food and drinks under one roof.

Skatecafe isn’t your only business, can you tell us something about your other projects?

We have a band called Fuck Fuck Fuck, we just recorded our first songs which will be released soon, we’re playing for a couple years already and have a lot of fun. And we’re now starting a new clothing brand, also something stupid where we laugh a lot about the items we make. Its called Maät and will be available really soon.

What are your plans for the future?

We rent Skatecafe but also 3000m2 of warehouses surrounding us, these we rent out to our friends who started a nightclub called Garage Noord , motor workshop called “In-n-Out Classics”, music studio’s (Jungle By Night, Gallowstreet, Indian Askin), a (kick)boxing club called “Boogieland”, a Mexican restaurant called “Coba”, a photo studio called “Flint” and more. We’ve got enough to do for now, all will be demolished in about two years so for now we try to make the best of it. What we will do after we’ll see by then.