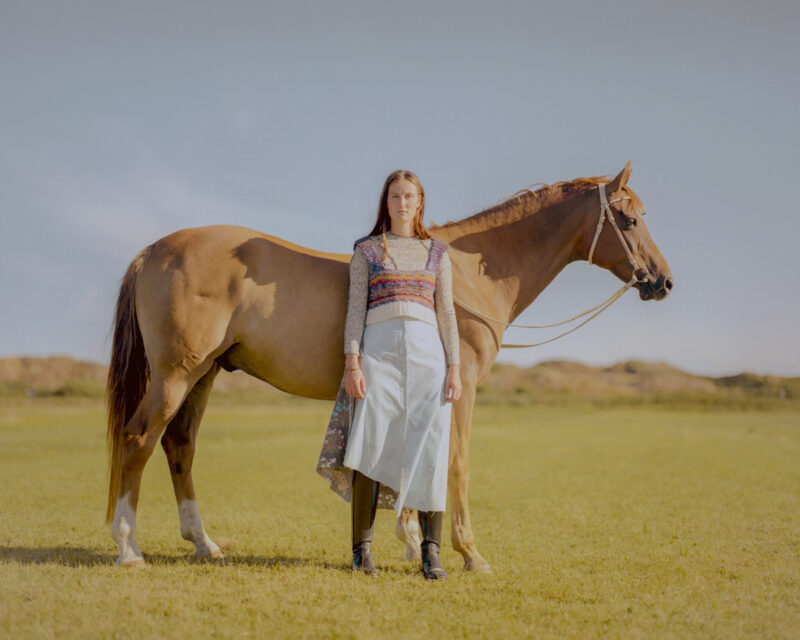 Nolwenn Le Flanchec is a Thai/French Creative director and Photographer. She was born in Paris and spent most of her life in Singapore. After studying Photography in Paris, she settled in Amsterdam where she now resides and works. Nolwenn’s practice is centred around femininity and the ways in which photography has shaped ideas about what it means to be female.

About ‘Haus am Strand’ – words by Jovana Reisinger:

In the summer of 2020, Marie Godt and Nolwenn Le Flanchec travelled to Langeoog, an east Frisian island in northwest Germany inhabited by 1,817 people. While some might imagine life on such a small island as a romantic, transfigured soap opera, Le Flanchec and Godt show proud, sublime, absolutely fierce and impassioned women of all ages. Marie Godt’s maternal family has been anchored here for generations and some of these women lent themselves to this series of photographs: Her grandmother, her aunt, her cousin’s twins, her sister and her friends. The result was a fusion of documentary and staged photography- showing carefully constructed images on the one hand and beautiful coincidences on the other. Always focusing on identity, location and the female perspective.

The eponymous “Haus am Strand” (house on the beach) is a lettering on a brick wall, the only black and white shot of the series that both marks a location and generates a place of longing. The equally real and fictional, metaphorical “Haus am Strand” looks inviting with its impressive nature and striking colors.

A bold retro bathroom ensemble, a blooming yellow rose, a metal teapot in which two people and their pretty garden surroundings are reflected. None of this contrasts with the women posing in the extensive landscape. Whether they’re at the beach, on the meadow, by the shore. None of these images show any contradiction. Rather, they create a parallelnarrative, their own universe which is also reflected in the styling. A pleasantly surprising mix of emerging designer and vintage, of business and leisure, of equally the joy of playfulness and seriousness- without being adorned or particularly pretentious. Even with the women lying on the carpet, standing in front of a house, leaning against a garden fence or with a horse standing behind them, they do not look staged. They appear determined, without the viewer having to know why.