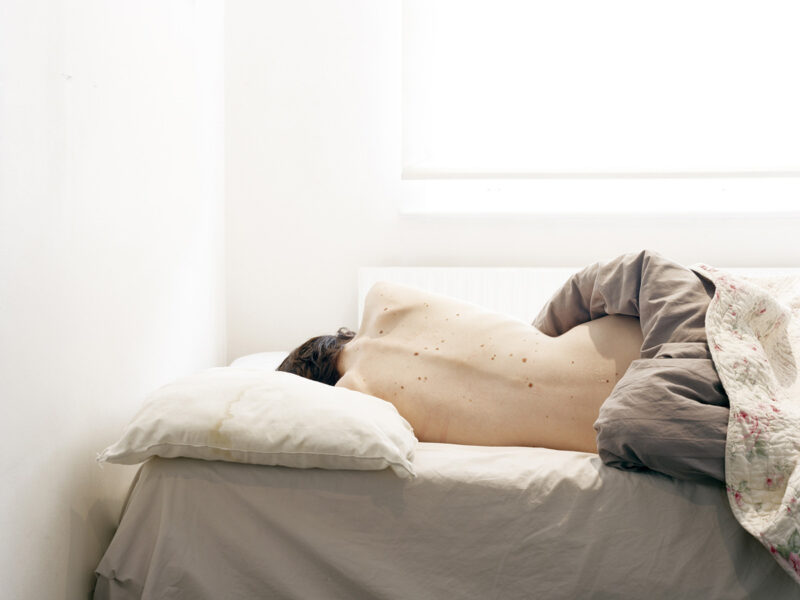 Geir Moseid is a Norwegian photographer living and working in Oslo, Norway. Since graduating from London College of Communication in 2008, Moseid has been working on multiple photographic series, operating at the point where documentary practice and staged photography meet.

By working with a 4×5 inch camera Moseid aims to challenge how one can talk about and discuss social, anthropological and economical issues in contemporary photography.

Communication and a humanistic approach has always been the base of the practice, while the narrative elements within the work often remains open and ambiguous. A focus on colour, texture, ambiguity and human relationships of various kinds forms the base of his practice. Moseid has exhibited across the world through both solo and group exhibitions.

About ‘Plucked‘ – words by Geir Moseid:

The series Plucked is an investigation into the duality of the home, urban alienation, social segregation and human relationships. This duality of the home extends further, adding layers to the series, incorporating the ethics of both social documentary and staged photography, as well as the possible cognitive dissonant experience of the viewer. This dissonance was built around notions of ambiguity and the uncanny. The home is often known to be a safe space where one can be private and intimate. The home has a sentiment of security that is built around the fact that we can seclude ourselves, distancing oneself from the interference and surveillance of others. It is with this point that its most problematic duality is made evident. The home is a harbourer of some of humanities gravest crimes. These crimes occur behind closed doors, including physical, sexual and psychological abuse. The element of time and death is also present in the repetition of flowers throughout the series. Here flowers act as a subtle metaphor concerning the duality of life and death, of which are inseparable through time, not unlike photography itself. The act of plucking/picking flowers is death and once the plucked flower is severed from its life force, it is subject to a slow, often beautiful, process of dying. This dialogue with death has the ability to create notions of the uncanny. By depicting something that is familiar, yet strange, or appealing and repulsive at the same time is often regarded as a signifier of the depiction of the uncanny and raises contradictory beliefs (cognitions) for the viewer, encouraging the viewer to create his/her own opinion, which is hopefully based on the emotion that the photograph offers the viewer.