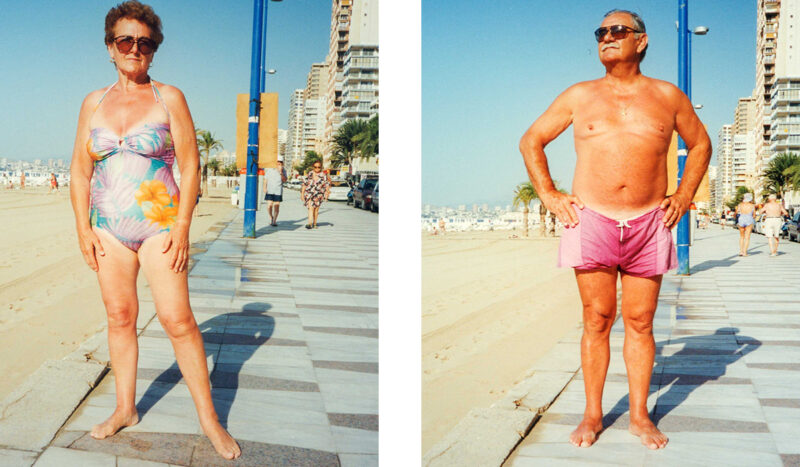 Erik Kessels is a Dutch artist, designer and curator with a great interest in photography. He’s Creative Partner of the Communication Agency KesselsKramer since 1996, in Amsterdam and London. Kessels has published over 75 books of his “re-appropriated” images and has written the international bestseller Failed It!. He was «a visual sorcerer» by Time Magazine and a «modern anthropologist» by Vogue (Italia).

Carlo and Luciana were a couple from the small Italian town of Vignola, in the province of Modena. Before they met, Luciana worked as a tailor with her father and sister. Once married she became a housewife, although they never had children. Carlo worked as a clerk in a bricolage store. The couple made a small handful of trips right after they were married but dedicated the rest of their working lives to… work. At least that is what we can deduce from studying these photos. We first meet Carlo and Luciana somewhere between their 20-30s. This is the beginning of their project, black and white images, many shot on the road. Yet it is not until later, past the blank pages symbolic of their working years, that we really get to know how Carlo and Luciana explored the world.

Black and white becomes colour, we witness time passing; fresh, newly-wed infatuation grows into a retired life of familiar partnership. What never changes is Carlo and Luciana’s commitment to their project and the love that feels ever-present. By studying the photos we notice that Carlo poses for the camera – for his legacy – often looking into the distance. Whereas Luciana mostly addresses the man behind the camera, she poses for him. Together they create a curious contradiction; two halves each with their own different motive, making one whole.

In almost every picture, we have him or her but never them. The few pictures where our couple are captured together were probably taken by resort staff members or fellow holidaymakers they met along the way. Carlo and Luciana undoubtedly lived a vibrant life, full of adventure and joie de vivre.

These images were developed by Sergio Smerieri, a studio owner and friend of Carlo and Luciana. Sergio recalls how all 36 images from each roll of film made it into their albums: an all or nothing kind of collection with fixed rules. Same place, same time, ‘same same but different’ you might say.

Find out more about the book