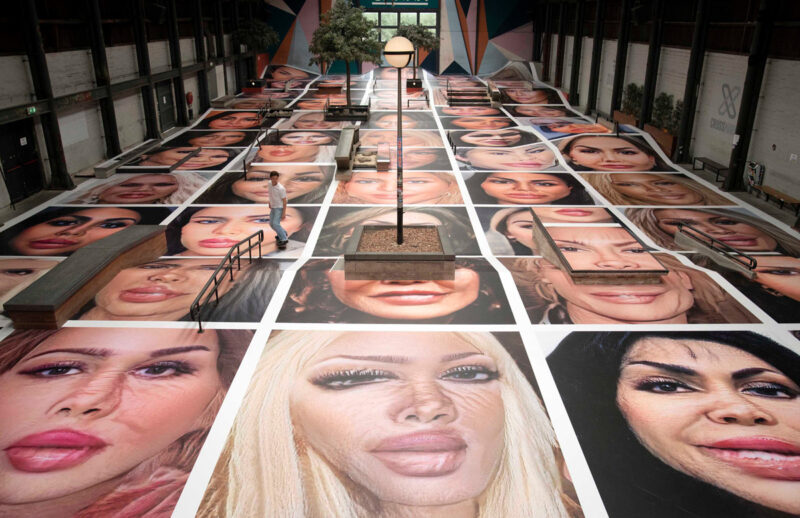 There was a time in which images were manipulated for better online circulation. You could happily live with your flaws, as long as there was a picture of yourself totally denying them. Today, reality itself is being modified to better shine online. An example? “The selfie-view camera has been noted to prompt to consider nose jobs, in an effort to correct the lens distortion occurring at close range – selfie range – that makes their nose appear bigger than it actually is” (Laurens Otto, Resolution Editorial).

According to the Korean philosopher Byung-Chul Han, beauty is losing its original power to shake people’s consciousness and create a fascinating discomfort.

“The smooth is the signature of the present time. It connects the sculptures of Jeff Koons, iPhones, and Brazilian waxing. Why do we today find what is smooth beautiful? Beyond its aesthetic effect, it reflects a general social imperative. It embodies today’s society of positivity. What is smooth does not injure. Nor does it offer any resistance. It is looking for Like. The smooth object deletes its Against. Any form of negativity is removed.” (Byung-Chul Han, Saving Beauty)

That could easily be the background of Erik Kessels latest project for BredaPhoto 2020 (September 9th – October 25th, Netherlands), titled ‘Destroy My Face’. It’s a skatepark, but also a gallery of plastic surgery on which leaving permanent scratches to ruin that appearance of perfection.

Erik Kessels is a Dutch artist, designer and curator with great interest in photography. Kessels is Creative Partner of the Communication Agency KesselsKramer since 1996, in Amsterdam and London. As an artist and curator, Kessels has published over 75 books of his “re-appropriated” images and has written the international bestseller Failed It!. He was called “a visual sorcerer” by Time Magazine and a “modern anthropologist” by Vogue (Italia).

About ‘Destroy My Face’ – words by Erik Kessels:

Today we shoot and shoot until we get it right. It seems like we’re living in the midst of a photographic renaissance. We are making more images now than ever before. This mass-produced image culture brings the value of an image in contemporary society into question. Our current society seems to be driven by consumption, or more specifically overconsumption. We consume images like fast food; en masse, shoveling them in with reckless abandon. Like the food we consume; it’s designed to look perfect but often all devoid of any real substance. The same can be said on how we present the image of ourselves online. Being insta-perfect has become the norm instead of the exception. This online private propaganda has often even a place offline.

Plastic surgery has become something pretty normal in today’s society. However, when taken overboard, these surgeries can result in deformation and transforms mankind into monsters. I showcase these archetypical faces in a grid, to be seen in a very unusual spot, where visitors can interact and interfere with these faces. As easy as they were once made beautiful, as easy they are now destroyed.

Skatepark Pier15 will be completely dedicated to the installation ‘Destroy my Face’ during Breda Photo. The images of plastic surgery faces in the installation will be slowly destroyed by the skateboarders that ride on them.