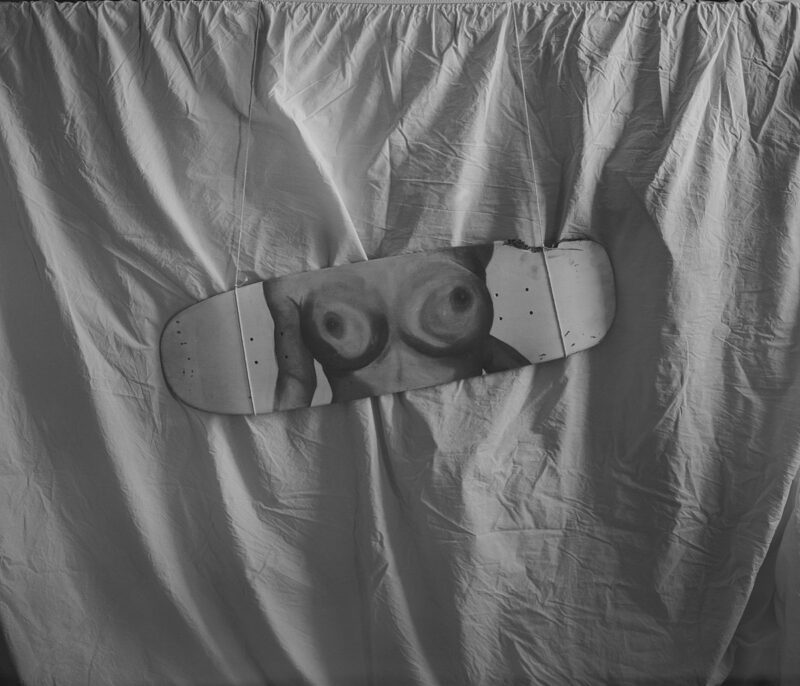 Riccardo Angei was born in Sardinia in 1985. From an early age, a great lover of cinema and visual culture, he recently earned a degree in fine art photography from Edinburgh College of Art.

He explores different communities to bring to light individuals often lacking in representation and which, at the same time, he finds essential for his own personal growth. He actively collaborates with the LGBTQIA + community giving its members active roles in artistic production in such a way as to obtain a change in the gaze.

Keeping photography as a therapeutic tool for himself, he pursues the dream of having a career as a filmmaker.

About Beyond the Others, in Front of Everyone – words by Riccardo Angei:

Beyond the Others, in Front of Everyone is an organic project born from the need to go beyond the facade image representing the community of skaters, almost totally identified in a cis-gender/straight environment and imbued with elements of toxic masculinity.

The work focuses on the LGBTQIA+/women skate community-based in Scotland. It started collaborating with the Skateboobs, an “Edinburgh Based Female, non-binary and Queer Skateboarding collective with a drive to empower others”. It then progressed, witnessing the birth and growth of the QSC (Queer Skate Collective) founded in Edinburgh to which groups born in Dundee, Glasgow, Inverness etc., have quickly joined.

I portrayed numerous subjects, moving across different formats and mediums, trying to merge them in a unique visual outcome, working within the community, and living it to understand its mechanism and necessities better. These aspects made me explore the work as an activist and ethnographer.

The sense of community emerged further with the idea of having a direct collaboration during the lockdown, asking the members to entertain themselves creators and document episodes of their daily life through disposable cameras that I sent around.

The sense of community emerged further with the idea of having a direct collaboration during the lockdown, asking the members to document episodes of their daily life through disposable cameras that I sent out.Despite the impossibility of moving due to the lockdown, it was possible to cross-sect the community on a national scale.

Through social media and the pages of the various associations, I circulated two open letters in which I explained the nature of the project and subsequently provided a set of instructions and guidelines, useful for those who were willing to participate.

The set of photos obtained through this practical and my production defines a project with a varied visual outcome. Skating is the joint glue that brings together the most disparate subjects in an inclusive atmosphere.