Brandon Dunning and the artificial elements that deform time 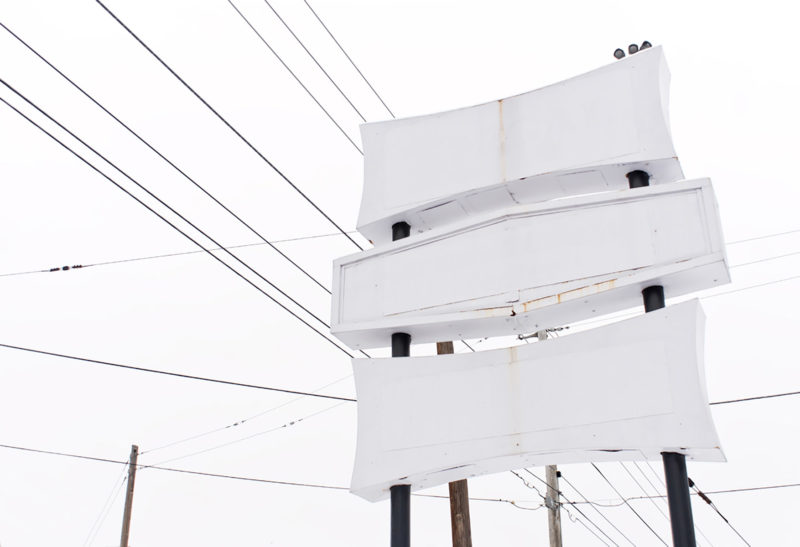 Brandon Dunning is a photographer based in the Southern Massachusetts and Rhode Island area. Graduating with a BFA in Design/ Photography from the University of Massachusetts Dartmouth. He currently works at Panopticon Imaging in Rockland, MA as a photo editor and fine art printer. Brandon’s work is mostly in digital format but also works in film format.

About ‘A Sign of the Times’ – words by ‘Brandon Dunning’:

Signs seem inescapable in our consumer-focused society. Businesses incorporate signage as land markers and advertiser for their location and services. Signs are erected and sometimes forgotten until the next business takes over the location, or just left in place to decay. As signs are being installed, demolished or left to decay the landscape is continually being transformed. In between the installation of a new sign to the deconstruction of its remains there are states of change; there is dilapidation, erosion, repair and decay. Signs come in different sizes, shapes, forms and colors. All these subtle differences have a profound effect on what their relationship is to their environment.

There are many moments showing the visual change in between the different states of a sign that show the passing of time. More rust form, fresh paint is applied or the elements deform the sign. Within all the changes a sign goes through the relationship it has to the landscape and it’s other natural surroundings changes with it. There is also an element of the human influence on the changing in the landscape which is juxtapose to the surrounding natural environment that changes naturally through the passing of time. In a state of decay signs are no longer effective as forms of advertisement but the influence on the landscape is still visible through the shapes and forms of what remains.